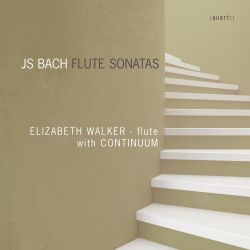 “This CD gives food for thought to the listener for several reasons.
First there is the cover: ‘flute with continuum’, only in the booklet we will find the names of the
cellist and harpsichordist.
Furthermore Elizabeth plays a ‘modern’ wooden flute from 1960, while at the same time she’s
mastering all of the historical flutes as well.
Then she has chosen to play in Valotti temperament and chooses to change the intonation in
chromatic passages, much like Quantz made a difference between e-flat and d-sharp on his
instruments.
At first glance one is immediately caught by her expressive and meaningful playing. The sketches
are all melodically and harmonically structured in a logical and convincing way, together with the
beautiful playing of her continuo group. Walker has a wonderful sound, especially enjoyable in the
slow movements.
The fast movements are a bit static and less interesting to my taste, in spite of finesses in baroque
articulation, which, in her own saying, she is after.
But her plea for playing in style on a Boehm flute are very successful as far as I’m concerned.
Fluit.”
Dec 2011 • Translation by Jacqueline Sorel