Flute ensembles, masterclasses on baroque style, exploring tone and colours in the heart of the Tuscan Alps – a tranquil, remote and most beautiful setting – this 10th century village plays host again to Flutes in Tuscany.

New to the team of Elizabeth Walker and Sarah Murphy is Rowland Sutherland, who will add contemporary techniques, jazz improvisation and evening live Jazz sessions for those keen to have a go! 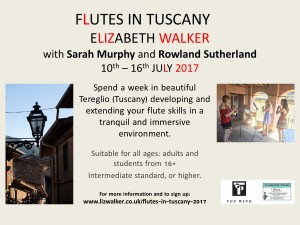 Places will be limited, so early application is advised.

A deposit of £200 (€250) should be paid immediately to secure your place with an application form to liz@lizwalker.co.uk. The remaining payment of £700 (€810) should be paid by June 1st 2017. This cost covers ALL accommodation and food, and includes transfers to and from Bagni di Lucca station at the start and finish of the course.

Top Wind have kindly offered financial assistance of up to £200 and is awarded on application – deadline for applications is 1st May 2017.

Participants stay in several picturesque houses in the village, including La Fagiana – http://www.la-fagiana.com. Breakfast, lunch and dinner are all provided using fresh, local ingredients in venues within the region.

“It has been such a wonderful time all together in Tereglio… The location was really inspiring for music… The thing that I’ve probably Enjoyed most is the companionship; you are all such wonderful persons!”
—Tommaso Della Croce

A typical day in Tereglio

Tuesday to Friday
8.30am breakfast on the terrace.
9.30am group warm up with Sarah and Liz
10.30am Masterclass or individual lessons with Liz or Sarah (rotated) or a rehearsal session with piano accompanist – Sally Halsey
12.30 – 1.30pm Lunch
2 – 5pm Options: Study/Scale class with Sarah, Baroque Studies with Liz, Jazz with Rowland or free time.
6 – 7pm Flute ensembles, great arrangements using piccolos, alto and bass flutes. Sponsored by WonderfulWinds
7.30pm supper followed by a variety of evening activities including Jazz sessions and free concerts with the tutors.

Saturday YOUR concert day in Tereglio
Sunday breakfast on the terrace followed by travel home.

Arrival date is Monday and the course starts with lunch. Those wishing to arrive on Sunday, may do so at an additional cost of 30 Euros to cover accommodation and breakfast. There will be a morning warmup for those arriving on Sunday.

See Flutes of Tuscany 2016 for photos and videos from last year’s course.

John Dyer was commissioned to paint this stunning painting of Tereglio in Italy as part of last year’s Flutes in Tuscany. You can purchase this poster here.

How To Get There

Train to Bagni di Lucca from Pisa airport via Pisa Centrale and Lucca and also from Florence and Bologna, via Lucca — http://www.trenitalia.com/homepage_en.html

A canyon carved by the Rio Pelago over thousands of years. A deep limestone gorge in the Val Fegana, under the slopes of the Tre Potenze and Rondinaio mountains. The Orrido di Botri has been a nature reserve since 1971 and the canyon is unspoiled. It is home to many rare and majestic animals, such as the royal eagle and the wolf. Besides the wolf that lives all year round in the Apennines, there are roe deer, hare, squirrels, marmots, foxes, porcupines, skunks, pine martens and a small group of goats. 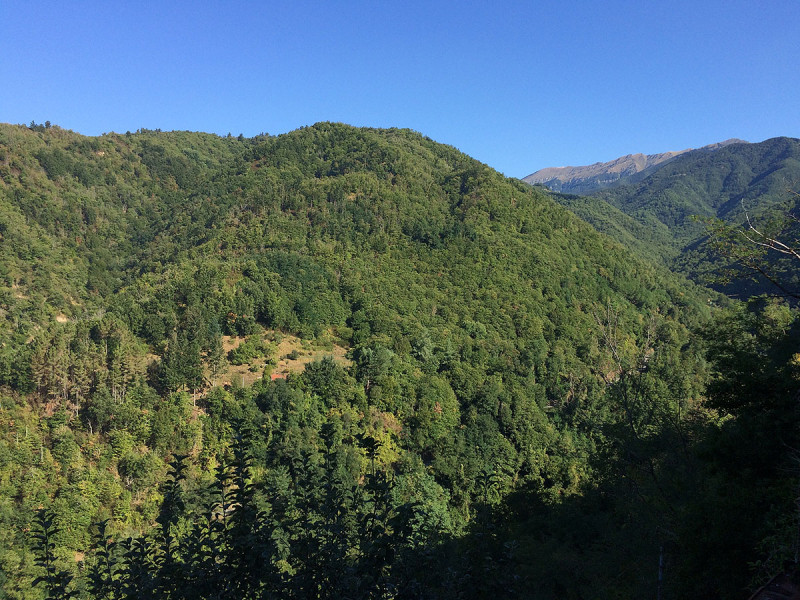 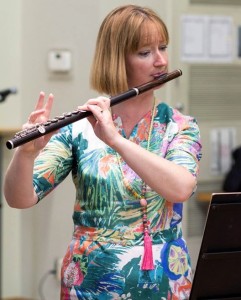 ELIZABETH WALKER studied at the Royal College of Music as a Junior Exhibitioner (where she was awarded the Sally Wainwright woodwind prize in 1985) and as a graduate at the Guildhall School of Music and Drama, studying renaissance flute with Nancy Hadden, baroque and eight – keyed classical flute with Stephen Preston and modern flute with Kathryn Lukas. She went on to do a postgraduate study of Early Music at the Koninklijk Conservatorium in The Hague, studying with Wilbert Hazelzet and receiving masterclasses from Barthold Kuijken. Elizabeth has performed in a number of period orchestras including the English Baroque Soloists, The Orchestra of the Age of Enlightenment, The Orchestra of the Eighteenth Century and the Classical Opera Company.

In 2008, Elizabeth recorded a solo CD of Telemann’s Fantasias on a modern wooden flute, followed in 2011 with a recording of the J.S.Bach Flute Sonatas with her group ‘Continuum’. In 2012 she formed a partnership with the pianist Richard Shaw to explore repertoire from the mid nineteenth century composed specifically for her original Louis Lot Boehm-system flute, dated 1859. Together they have recorded a CD ‘Finchcocks Schubertiade’ and a film using Chopin’s original Ignace Pleyel piano from 1848, given recitals at the British Flute Society convention, the National Flute Association in Chicago, and in Canada and Holland.

Elizabeth is a flute teacher at the specialist music school in Wells and is in demand as a baroque flute teacher following the success of her award winning Baroque Studies Book (Winner – Best Flute Method NFA 2015). 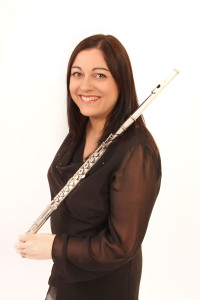 SARAH MURPHY is a flautist based in Derry/Londonderry in the North west of Ireland and has a passion for creative music making. She studied at the Guildhall School of Music with Philippa Davies, Kathryn Lukas and Edward Beckett. Sarah is a respected and experienced private Flute teacher of all ages and ability levels and is also Flute tutor for University of Ulster and Queens University Belfast. As a professional flautist Sarah gives chamber music recitals, tours with Festive Flutes, and freelances with the Ulster Orchestra. For over 25 years Sarah has performed at many festivals and venues around Europe with leading musicians. Some of her personal musical highlights include: sell out performances with Juan Martin at National Concert Hall Dublin, A special City of Culture 2013 performance with Festive Flutes and an 80 strong Flute orchestra combining the William King, Hamilton and Churchill Flute bands; and performing at the Istanbul Festival in the spectacular 6th Century Church, Aya Irene which sits in the grounds of Topkapi Palace.

Sarah believes in everyone’s natural musical ability and her focus is on building confidence and expressive playing. She engages and inspires her students to reach their own goals. Sarah encourages a positive approach to practise by setting smart goals and develops technique using a bite-sized learning approach that can be applied immediately. She creates fun and informal group music making opportunities and performances that further develop listening skills and enable students to experience the interplay between performer and audience in a relaxed setting. Sarah is also Artistic Director and founder of Wall2Wall Music (www.wall2wallmusic.org) a music education company which delivers training to teachers and produces large scale collaborative composition and performance projects with people of all ages, all standards and all instrumental genres. 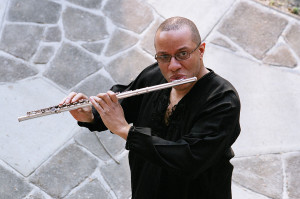 Flautist ROWLAND SUTHERLAND enjoys an international career in many different fields of music. He regularly performs in new music ensembles, jazz bands, symphony orchestras, various non-Western groups, pop outfits and as a soloist. Many of Rowland’s solo contemporary flute performances have been broadcast on BBC Radio.

He has composed and arranged music for bands, ensembles and the BBC. He made his BBC Proms debut as soloist during the 2006 season performing Steve Reich, for his 70th birthday celebrations at the Royal Albert Hall.

Rowland has led a number of jazz and jazz flute classes and workshops at many different institutions including the Royal Academy of Music, Trinity Laban Conservatoire of Music and Dance, Birmingham Conservatoire, Royal Northern College of Music, Leeds College of Music, Aldeburgh Music, Oxford Flute Summer School, Flute School London and All Flutes Plus. Also at The National Gallery London, Youth Music and at a number of schools in London. Rowland often gives classes and workshops for classical flute students, taking them through many of the vital elements of jazz.

Rowland occasionally tutors for the National Youth Jazz Collective. He has also coached various ensembles at many of the above institutions. !